It was always going to be a tall order for Ireland to reach the same heights this year that they did in 2018, but there have been too many underperformances from them in 2019 for anyone’s liking. An underwhelming Six Nations was forgiven because the general consensus was that they had one eye on the World Cup, and warm-up games are more about players getting rid of rustiness than they are about results. Last Saturday’s loss to Japan, though, was extremely disappointing for Irish supporters, and potentially damaging to the confidence of the team.

The defeats to Scotland and Wales in 2017 were supposed to have taught Ireland lessons about maintaining an acceptable level of performance, but against Japan, they fell victim to the same lethargy that has characterised their ‘off days’ in that year’s Six Nations. Ireland are lucky that their next game has come around so quickly, and that is against the weakest time in the pool, because it gives them the chance to rebuild confidence and rest their star players for what is now a do-or-die clash with Samoa.

Their previous fixture against Russia was a landslide 62-12 win at RWC 2011. I hate putting down Tier 2 teams because rugby (like any other sport) is more entertaining if there were more strong teams (last weekend was proof of that), but unlike Japan, Russia haven’t improved at all over the last eight years whilst Ireland have progressed in leaps and bounds. Joe Schmidt may have chosen a second-string squad for this match, but truthfully, it’s hard to picture them being challenged by a side who were hammered 42-14 by a preseason-stage Connacht minus Kieran Marmion, Jack Carty and Bundee Aki less than four weeks ago.

Russia do have individuals who can cause trouble for teams (such as Tagir Gadzhiev, Denis Simplikevich and Vasily Artemyev), but Ireland’s superior fitness levels alone should be enough to win them this game, nevermind other factors like skill or attacking/defensive structure. These are the types of matches where players can fall into the trap of either doing too much to stake their claim for involvement in bigger games or doing too little in order to avoid injury.

I think the smartest approach for Ireland in this Test is to play simple, territory/possession-based rugby and keep applying pressure, with an emphasis on going coast-to-coast in attack in order to exploit the frailties that Russia have in defence out wide. There’s no point in rolling out an intricate backline move that might be the difference between winning and losing a knockout game later on in the tournament when it’s not necessary. Russia have enough weaknesses that Ireland can expose by holding on to the ball for extended periods and playing in the right areas.

For me, Russia’s Achilles’ heel is their defence off set-pieces, both in terms of their set-up and the actions/reactions of their players. Below, we see them getting carved open by Italy off first-phase due to two individual errors:

Russia’s line speed here is excellent, but this try comes down to erroneous defence from two players. First, Russian #8 Victor Gresev (circled below in purple) bites down on the decoy line of Italian #12 Luca Morisi (circled below in green) even though the ball has already gone behind the inside centre: 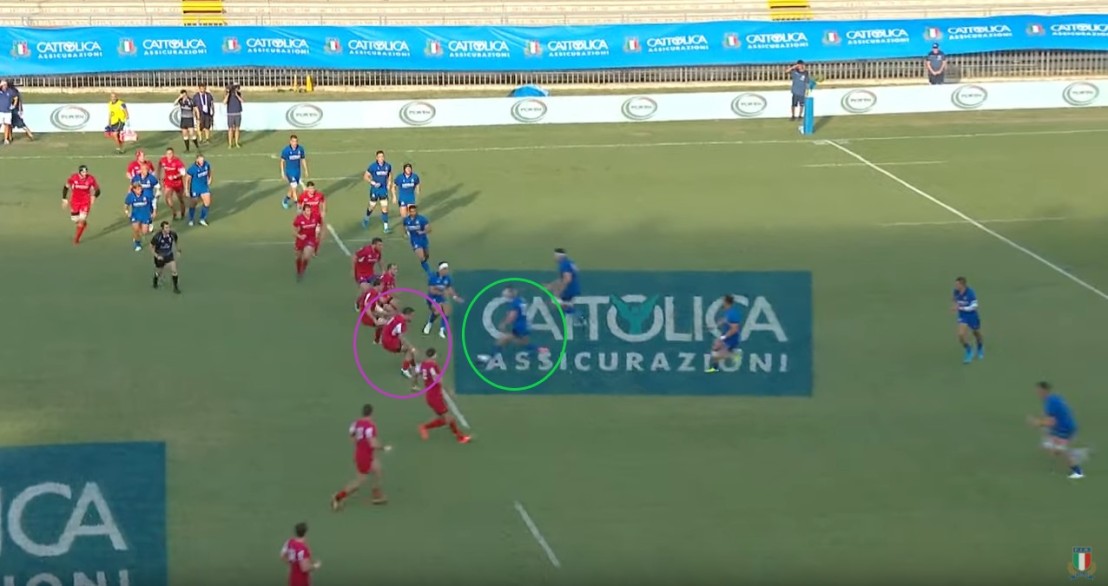 This move happened at fast pace from Italy, but Gresev had more than enough time to readjust and push out to cover the next player in the Italian attacking line.

Despite this mistake from Gresev, there were still enough Russian players to number up on Italy, but Russian #13 Vladimir Ostroushko (circled below in orange) gets caught ball-watching, and misses the change in running line from Italian #7 Jake Polledri (marked below in yellow): 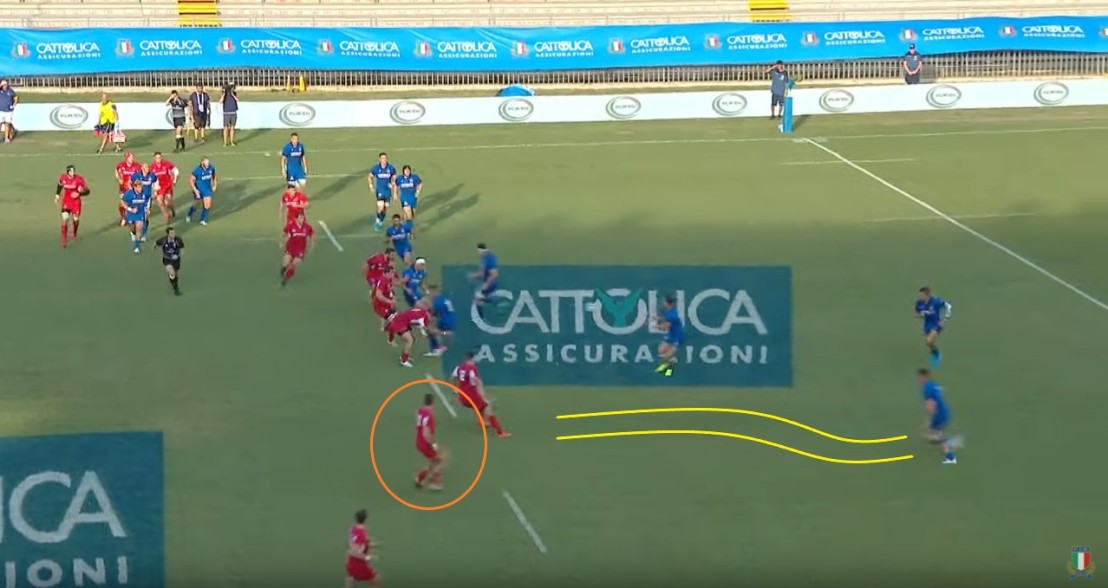 By the time that Ostroushko realises what’s happening, he has drifted too far outside of Polledri, and puts in a despairing side-on tackle with one arm, which the Azzurri openside flanker breaks through with relative ease: 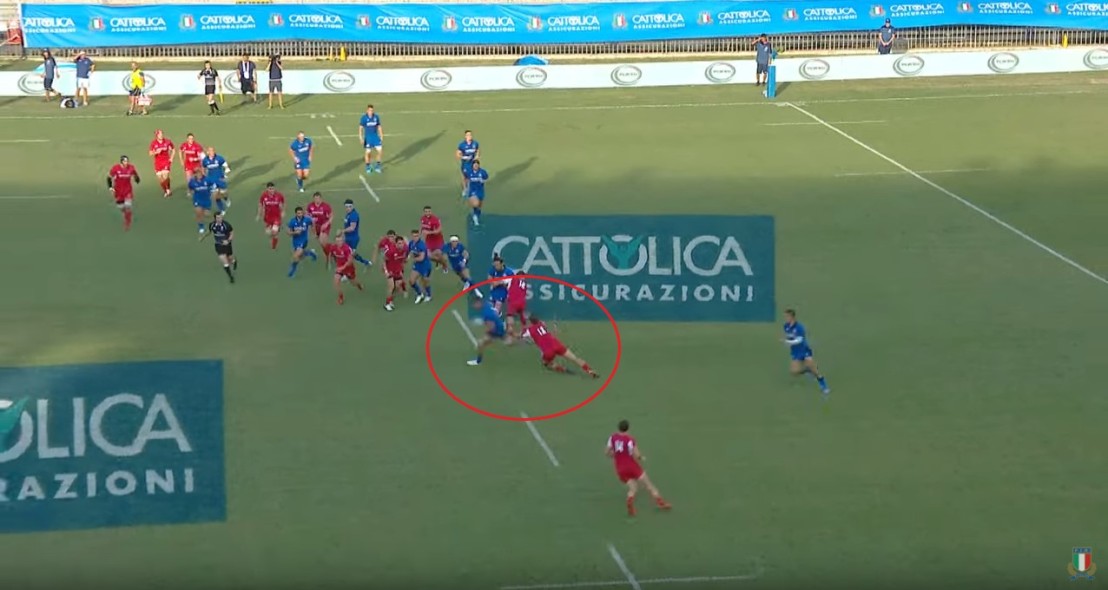 Russia conceded a try from an Italian lineout maul later in the game, although this time, their biggest failing was poor communication. Italy use one screen pass to their first-receiver and it leaves the Russian back line defence all at sea:

The first issue here for Russia is that Ostroushko and their #10 Ramil Gaisin (circled together below in green) decide to cover the same player (Italian #10 Tommasso Allan), leaving Russian #11 Kirill Golosnitskiy (circled below in yellow) in no-man’s land: 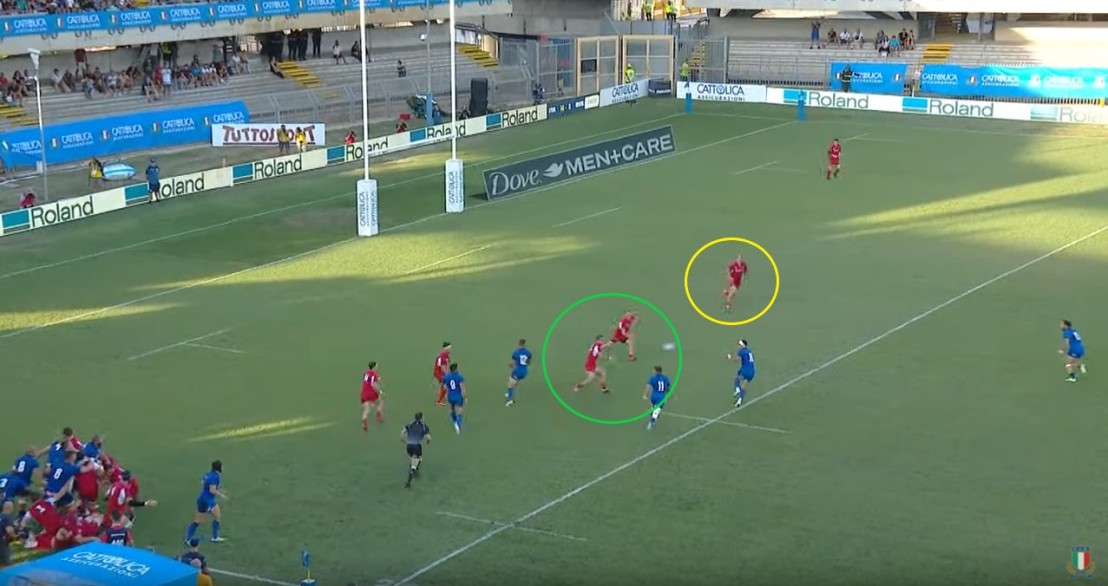 Once the ball went past Italian #11 Matteo Minozzi (positioned above on Allan’s inside shoulder), it was obvious that he was a decoy, so there should have been some sort of call or non-verbal signal from Ostroushko that he was going to cover Allan and that Gaisin needed to push out and cover the next Italian attacker.

Notwithstanding the lack of communication from Ostroushko and Gaisin, it’s not clear exactly what Golosnitskiy (circled below in yellow) tries to do afterwards: 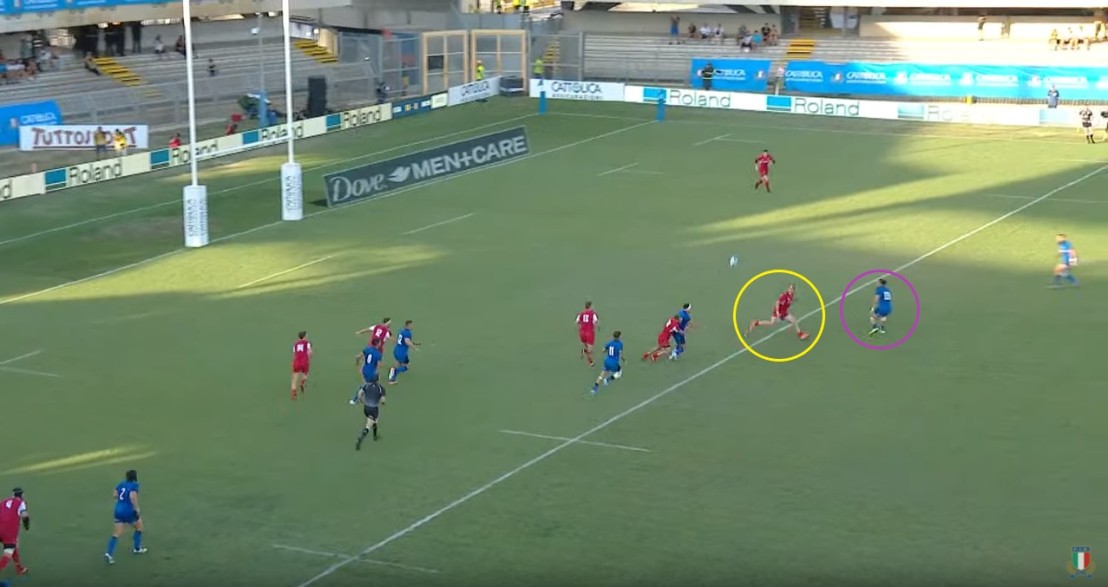 He runs into the space between Allan and Italian #13 Michele Campagnaro (circled above in purple), which presumably means he’s going for the intercept, but he continues running even though the ball has gone over his head, taking himself out of the game completely. It’s easy to say this from an armchair, but the wiser choice would have been to rush up into Campagnaro’s face to pressurise his handling skills instead of going for an awful attempt at an intercept that bordered on comical.

Russia didn’t fare any better defensively against Connacht a couple of weeks later; Andy Friend’s side managed to engineer a lot of space in the five-metre channel for Darragh Leader and Stephen Fitzgerald to run into within the first 20 minutes:

Russia are actually quite well-organised initially in this example; they are spaced out evenly and have numbered up on the Connacht players properly, with their #10 Yury Kushnarev (circled below in blue) acting as a shooter to pressurise his opposite number: 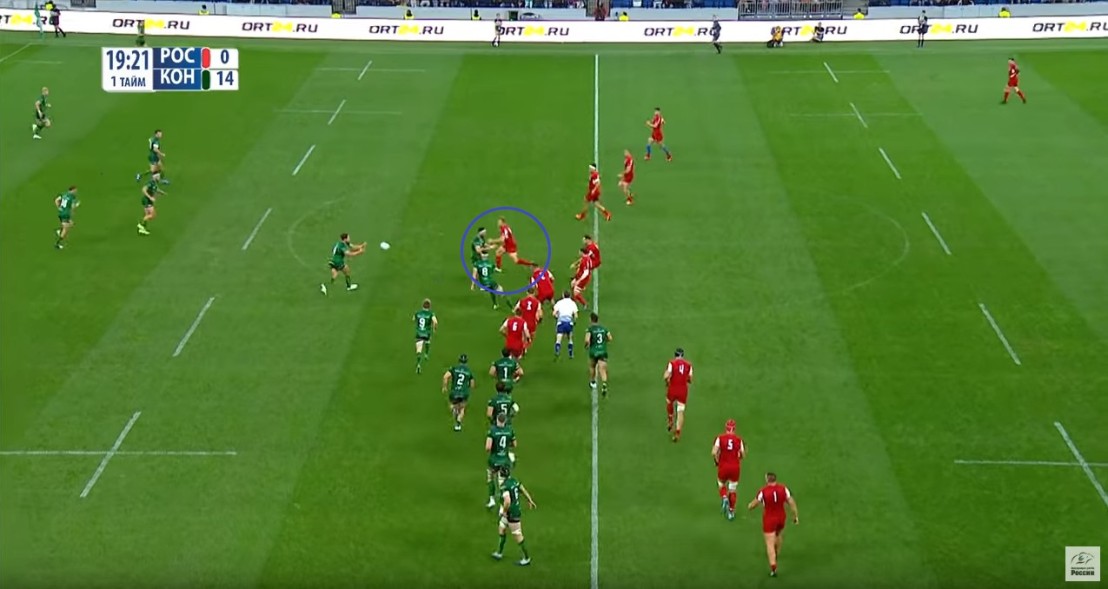 They run into problems when the ball gets as far as outside centre, though, because their #14 German Davydov (circled below in purple) gets caught in two minds at the edge: 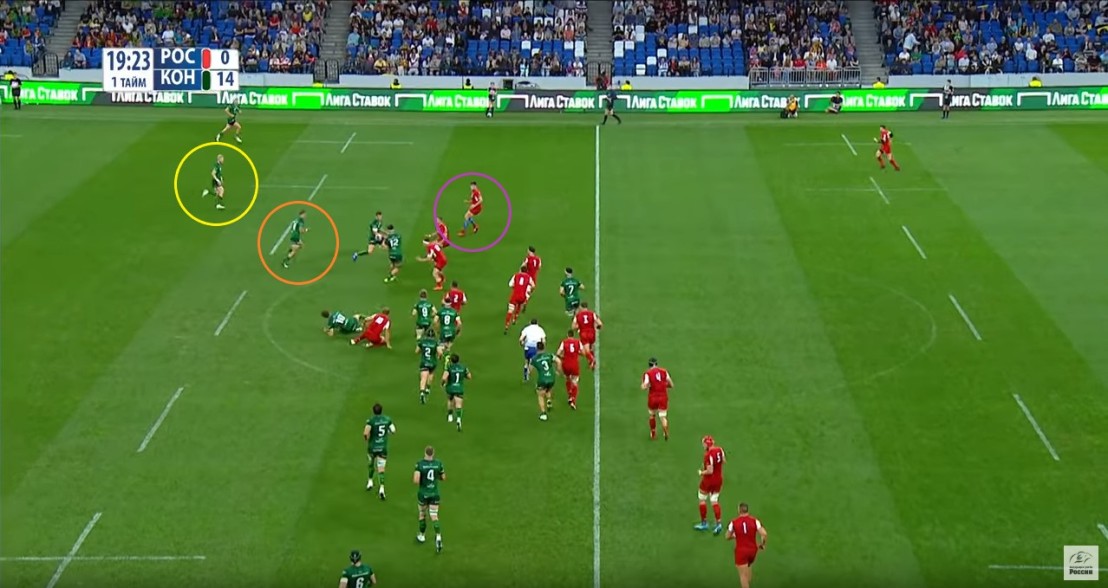 He chose to do neither, instead planting his feet and bending at the waist to wait for the Connacht right winger to run into him:

The weak tackle that ensued gave Porch the freedom to pass out of contact, and Connacht made plenty of yards down the left wing. Being the last defender in the line is tough because if you don’t get your decision-making and execution spot-on, a line break is bound to happen, but Davydov didn’t display any real conviction, and his team paid a heavy price.

Russia conceded six tries in total against Connacht, but it was the fourth one that will have piqued Schmidt’s interest. Connacht used a two-phase strike play to take advantage of Russia’s reorganisation after a midfield crash:

The Russian defence is decent for the first phase here, with quick line speed and quality tackle technique putting replacement tighthead prop Conor Kenny to deck efficiently, but it’s the alignment from Lyn Jones’s side on the subsequent phase that hamstrings them.

Below, we can see one Russian defender, #15 Vasily Artemyev (circled in orange) covering more than 20 metres of space between the defender inside him and the touch line, with Conor Fitzgerald and Stephen Fitzgerald (each circled in purple) running arcing lines to get into his channel and Niyi Adeolokun (circled in blue) holding his width near the touch line: 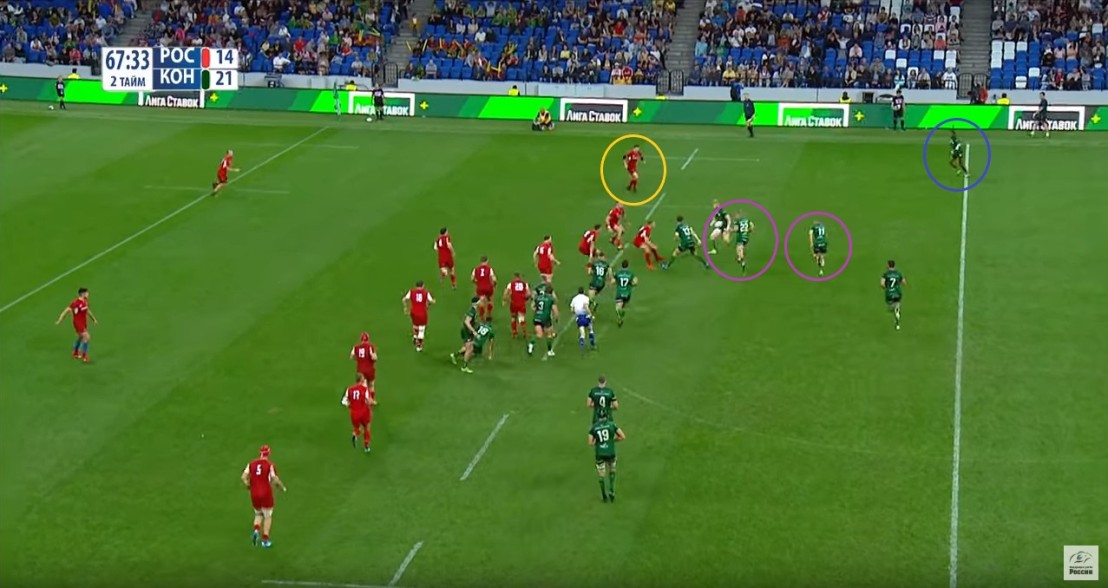 This is where I think Bundee Aki will be deployed as a decoy on second-phase power plays; the Connacht centre draws attention from defenders because of his immense physicality, and I would imagine that Ireland will play off him regularly.

Ireland shouldn’t have any difficulty getting field position because Johnny Sexton and Jack Carty are more than likely going to have a field day with regards to finding space in the Russian backfield. Sexton is a world-class exponent of putting tricky garryowens above opposition wingers whereas Carty is more inclined to put delicate chip-kicks or punts in behind an onrushing defensive line. Both kinds of kicking strategies would pay dividends against Russia with the manner in which their back three struggle to cover ground in the backfield, and I think Ireland would get a huge return from pressurising the ensuing lineouts by putting Jean Kleyn at the front to put off Evgeny Matveev’s throw and having Tadhg Beirne lurking around the middle.

A Steady Hand On The Tiller

For all of Russia’s imperfections, Ireland do need a commanding performance and a result on Thursday because anything less would be an indication that the loss to Japan wasn’t a blip, but the setting in of rot. At the same time, now isn’t the stage of the tournament to be peaking, and I don’t expect Ireland to show their hand just yet. Ireland’s biggest challenge this Thursday is not their opponent, but striking a balance between not producing their best game of the competition and not going off the boil altogether.

One of the benefits of the strength in depth that Schmidt has built with Ireland over the last four years is that they can get through games like these comfortably without having to put out their star players. We’ve seen Ireland win handily against Canada and the US in this World Cup cycle with squads comprised of second- and third-choice players and apart from the close call with the Fijians in 2017 and last week’s shock loss to Japan, Schmidt’s side have put big scorelines on Tier 2 teams with their reserves.

With injury rates what they are in the modern game, it’s getting harder and harder to survive with a good starting XV alone, and while Ireland squads have been callow in World Cups gone by, the same can’t be said now. The possibility of Ireland’s fringe players forcing their way into the matchday squad against the better sides is remote at this juncture, but the mere thought of doing so should be enough to get at least solid performances out of them. Russia’s scrum and their willingness to throw the kitchen sink at teams in attack are reason enough to take them seriously, and Ireland don’t have to look too far back for a reason not to ease off against a perceived weaker team.