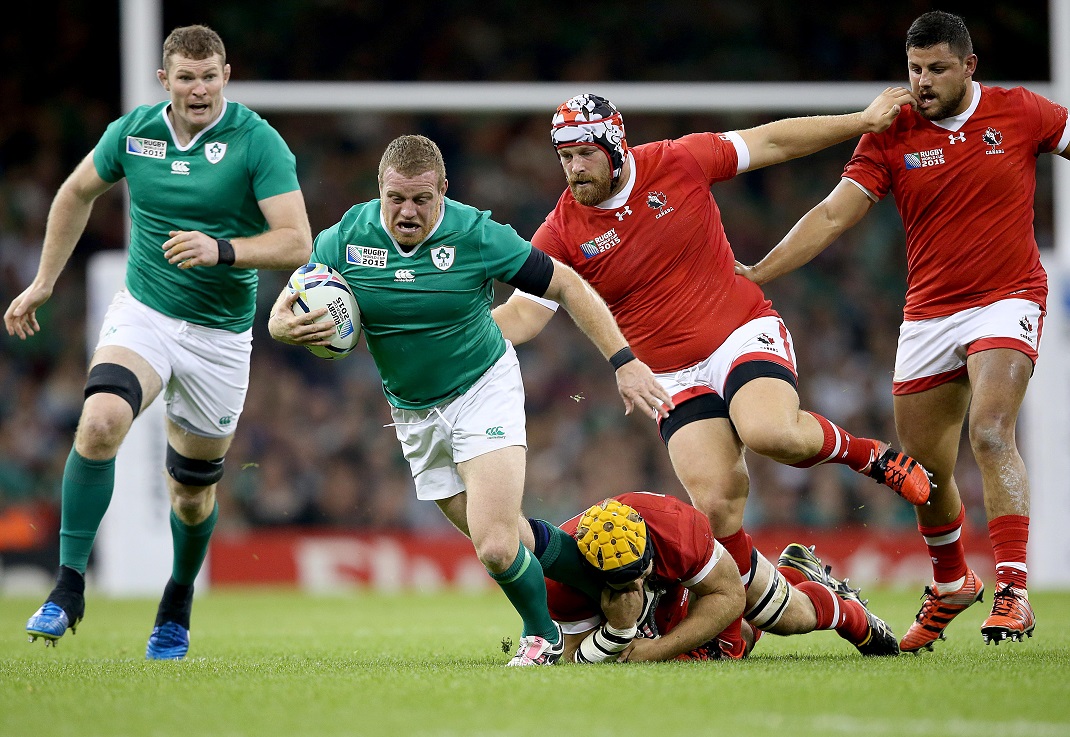 Playing a Tier 2 nation tends to be a double-edged sword for teams like Ireland. If a full-strength Irish side go out and beat them by a landslide, it’s seen as a wasted opportunity to give game time to younger players. If an inexperienced squad is picked and the winning margin isn’t significant, it’s seen as an underwhelming victory. When Ireland and Canada last met, Joe Schmidt put out a starting XV that was close to the strongest one available to him, and they put 50 points on Kieran Crowley’s team.

Schmidt has opted to rest Ireland’s starters this time around, selecting a matchday squad that contains 8 uncapped players. It’s still a game that Ireland should win, even without their star players, but Canada won’t roll over easily and it would be foolish to underestimate them. Ireland have been troubled by Tier 2 sides before (e.g. v Georgia in 2007), and although they’re in a good place at the moment, there is enough quality in Canada’s squad for them to be competitive. They scored 21 points against an Argentina XV team that contained the likes of Juan Manuel Leguizamón and Lucas González Amorosino in February, and they pushed Italy close in the pool stages of RWC 2015 and in June of this year.

Canada’s current head coach, Mark Anscombe, has in-depth knowledge of most of the players in Ireland’s squad from coaching Ulster between 2012 and 2014. There are a few new faces that he won’t be as familiar with, but the weaknesses of the players that he does know inside-out will have been given great emphasis in team talks and training sessions.

Diamonds In The Rough

Anscombe made a number of changes to Canada’s squad for the June Series from that of the one used by his predecessor, Francois Ratier, for the Americas Rugby Championship in February, selecting more settled starting XV’s against Japan, Russia and Italy. One of the shining lights in their front row in those Tests was Ray Barkwill, who showed himself to be aggressive in the tackle:

This game is a good chance for Ireland to bolster their options at hooker. After Rory Best and Sean Cronin, there’s a steep drop in terms of experience. Richardt Strauss is a shadow of his former self and his ongoing injury problems mean that he will likely never return to his best form. Niall Scannell, Rob Herring and Dave Heffernan don’t seem to feature in Schmidt’s plans and Tom McCartney isn’t Irish-eligible until 2017. James Tracy has had issues with his darts but he has been useful around the park for Leinster, and he will be able to show what he’s capable of against a seasoned operator who has played Super Rugby for the Western Force.

At tighthead, Jake Ilnicki has little influence on proceedings, but there is a touch of the Cian Healy about Djustice Sears-Duru, the Glasgow Warriors loosehead prop:

It would have been fitting if Dave Kilcoyne and John Ryan had been given starting berths, considering their from this season, but with a second Test against New Zealand looming next week, the management have decided that Cian Healy and Finlay Bealham could do with the game time to keep them ticking over.

Sears-Duru is not the only dynamic player that Canada have in their front five. Evan Olmstead is also an effective carrier when he does get the ball into his hands:

Olmstead is a frequent target at the front of the lineout, but without Jamie Cudmore, Canada’s pack are going to be short of street smarts and technical nous, and could struggle in the set-pieces with the undersized Brett Beukeboom partnering Olmstead in the second row.

The Canadian back row tend to be anonymous, with the exception of Aaron Carpenter making inroads from the base of the scrum. There will be opportunities for Dan Leavy and Jack O’Donoghue, who are both in blistering form, to impress, and Peter O’Mahony and Seán O’Brien need all the game time that they can get.

Canada have a bit more in the way of quality in the backline, especially at scrum-half. As well as having excellent speed of thought, Gordon McRorie is able to put a lot of hang-time and height on his box-kicks and speed on his pass:

Kieran Marmion and Luke McGrath are short of experience at international level, and testing themselves against a classy player like McRorie will be a god measure of where they stand at this moment in time.

In midfield, Pat Parfrey has been benched after some woeful performances in June, and Connor Braid has taken his place at 10. Nick Blevins has also been demoted after displaying a lack of incision at 12, with Ciaran Hearn selected at inside centre instead. There has been a revolving door policy for Canada at outside centre lately, with Brock Staller, Mozac Samson and Hearn starting against Japan, Russia and Italy respectively. Each of them were found wanting, so Conor Trainor has been handed the 13 shirt.

As is normally the case with Tier 2 teams, doing the basics well is their biggest weakness. Most of the Canadian players struggle to pass the ball accurately beyond a few metres, and it’s a limitation that becomes evident when they get the ball as far as midfield. The personnel available Canada at 10, 12 or 13 aren’t particularly skilful, which means that Matt Evans often has to step into the line to act as a playmaker because of his backline colleagues’ shortcomings:

It’s out on the wings where Canada are most likely to cause Ireland problems. While he struggles on the back foot, Taylor Paris has several notable qualities in attack. His vision is excellent and he delays his run onto the ball well so he gets it at full-tilt, and he’s incisive when on the receiving end of an inside pass. Whenever he gets isolated after making a line break, he’s not content just to get tackled and go to ground; he identifies the space in behind the covering defenders and keeps the movement alive with grubber kicks:

DTH van der Merwe has carved Irish provincial sides open in the past, and with the ability to score tries like this, he will see plenty of the ball:

There isn’t much complexity in Canada’s attacking patterns, apart from the occasional decoy runner and a rehearsed switch-back play:

Outside of this predetermined move, Canada’s phase play attack generally amounts to simple catch and pass along the line, making it easy for the opposition to drift across and make their tackles. Blitzing against New Zealand was the correct tactic, but Ireland might be better served not rushing up as quickly, as Matt Evans is adept at kicking into the space behind defences when faced with a hard press.

One area where Canada can be dangerous, though, is on the counterattack. They are quick to move the ball away from contact off turnover ball, and Ireland will need to be alive to the threat of this if they knock the ball on:

As discussed earlier, proficiency in the fundamentals of the game is what separates Tier 1 and Tier 2 teams, and this applies to Canada’s defence, too. They are inclined to rush up at different speeds, creating dog-legs all across the line, and getting their wires crossed in terms of who is marking who has been a recurring theme:

Systematic defensive errors on Canada’s part are a regular occurrence, leaving room for Garry Ringrose, Keith Earls, Craig Gilroy and Niyi Adeolokun to manoeuvre. Canada’s defensive strategy of committing two men to every tackle while not putting many numbers into defensive rucks is also ineffective as it leaves them short of defenders on the next phase:

Ireland should have time on the ball in attack and space to exploit against this type of defensive system.

Winning is important for Ireland tomorrow; a loss would not only be embarrassing, it would ruin any chance of them finishing this series in the top four of the IRB rankings. After getting the result, the individual performances will garner most attention. Despite some players having more experience than others, each will go into the game with the intention of reinforcing the idea in the management’s minds that they are deserving of starting places against bigger teams.

Joe Schmidt has already rejected the notion of taking part in next year’s Lions tour for the sake of working with the Irish players who are beneath the surface. One of the lessons learned from last year’s World Cup is that Ireland need greater squad depth, not just for 2019, but also for the tournaments and series that they play between now and then. If someone like Joey Carbery can make a big impact and slot into Ireland’s systems seamlessly, he can be trusted with a bench place against Scotland or Italy next year, and the same applies to John Ryan, Luke McGrath and several other players who will line out tomorrow.